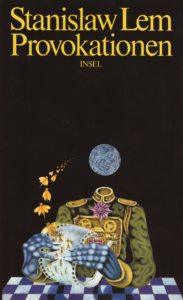 “Provocation” is probably one of the most important of Lem’s essays, unfortunately never translated into English. It is a review of a non-existent book about the Holocaust. The review was so suggestive that one of the members of the Commission for the Investigation of Nazi Crimes in Poland had publicly claimed to have this non-existent book in his library.

If a crime is not a sporadic transgression of norms, but a rule shaping life and death, it creates its own autonomy, just as culture does. […] With respect to industrialized crime traditional categories of guilt and punishment, repentance and revenge, become helpless.