It has been said, and with much justice, that Stanislaw Lem has transformed science fiction from a genre to a literature. 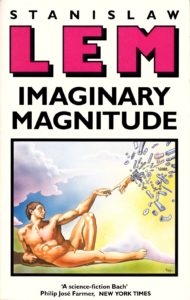 His current collection of short stories, essays and obiter dicta bear out this high characterization because it shows that Lem has lost none of his inventive powers, ironical musings, corruscating wit and narrative skills. The concept of Imaginary Magnitude is itself thought provoking: In the next century people will be too busy to read books from cover to cover. Accordingly Lem provides us with the prefaces to important volumes.

In these prefaces Lem parodies the literary shorthand so often found in the preamble of multi-volume histories of science, art and literature. The Lem approach is to caricature bibliographical pretentiousness and the other esoterica of the publishing scene. Lem’s caricatural skills go far beyond style. In his introduction to “Bitic Literature,” be instructs the reader in a new genre which the future will produce: “work of nonhuman origin — one whose real author is not a human being.”

In the fantasy which Lem concocts, all of Bitic studies arc subjected to scientific analysis while a special emphasis is placed on four “peaks,” namely monoetics, mimesis sophocrisis and apostasy.

The high point in Lem’s reconstruction of future umes is his introduction to “Eruntics,” in which the Golem XIV and the talking bacteria reader is treated to a highly sober account of how Reginald Gulliver (the name is not accidental), an amateur bacteriologist, decided to teach bacteria English.

Lem tells us that “the first to master Basic English syntax was Proteus orator mirabilis 64; on the other hand, E. coli eloquentissima continued to make grammatical errors even after 21,000 generations.”

The main problem which Gulliver had in his pedagogy “Was to distinguish between bacterial pseudology — irresponsible verbiage — and solid predictions, and he accomplished this in a manner as ingenious as it was simple by setting up ‘parallel prognostic batteries,’ called bacterial eruntors.”

While bacteria may be taught to verbalize in Stanislaw Lem’s future, they appear to be positively tongue tied, compared to Golem XIV, a supercomputer which is also the title of a book prefaced by our author. The introduction allows Lem to expatiate intelligently on computer science, information theory, modern physics and other abstruse disciplines as he recounts to the reader the saga of mankind’s most advanced computer mind, a piece of technology which could think 400,000 times faster than man.

The book digest provided by Lem explains the difficult pathways which led to the creation of Golem XIV. One of the prototypes had to be dismantled because he “became insolent with his superiors.”

Golem XIV is allowed to speak in Lem’s fantasy, and in threescore pages the apogee of computer science delivers himself of opinions which reproduce the flavor of modern scientific language.

A classic example of Lem’s pseud osciene is Golem XIV’s views on evolution: “In keeping with this belief, Evolution is forced to use death, since it cannot go on without it; it is lavish with death in order to perfect successive species, for death is its creational proof-reader.”

In the end Golem XIV commits circuit hari kiri. Lem does not provide the reason why the Golem committed suicide; in fact Lem denies such a thing occurred.

The reader will have to examine the circumstances surrounding Golem XIV’s sudden demise in order to gain enlightenment on this question.

By that time he will be an obedient and adoring fan of Stanislaw Lem.